The 1st issue for 2021 of the journal “Russia and New States of Eurasia” has been published.

The issue opens with the articles devoted to the problems of post-Soviet integration – the researchers analyze the 30-years history of the CIS and evaluate the prospects of development of the EAEU. Considerable attention is paid to Belarus: the authors of the issue consider the development of the political crisis in this country, the role of the Baltic states in destabilizing the situation in Belarus, and the influence of political instability on the Belarusian economy.

The researchers also focus on the actual political and economic problems of Ukraine – the impact of the change of the US administration on the policy of Kiev and the results of the banking reform in Ukraine are analyzed. The processes taking place in Central Asia have also become the object of study: the authors explore the parliamentary elections in Kazakhstan held in January 2021 and the transformation of Uzbekistan’s foreign policy in recent years. Much attention is paid to the situation in Georgia – the authors comprehensively investigate the political crisis that followed the parliamentary elections in the fall of 2020, and these elections are considered in the context of US policy in the South Caucasus.

Scientists’ attention is also drawn to social processes in the unrecognized republics of Donbass. The researchers from Donetsk analyze the formation and development of human capital in unrecognized states on the example of the Donetsk People’s Republic.

Center for International Security of the Primakov National Research Institute of World Economy and International Relations is holding an international expert meeting "International Cooperation in Countering Global Threats in the ICT Space: Opportunities and Prospects". 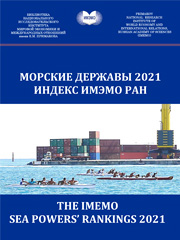