The annual General Conference of the European Consortium for Political Studies was held on August 24-28, 2020. For the first time the event was held in the video format.

The Consortium, established in the year 1970, brings together more than 300 universities and research institutes from fifty countries, which are interested in the collaboration in promotion of the political science. The Program of the Conference covers all the main directions of the political studies including the study of parties, parliaments, networks and institutions, and even the issues of political theory and methodology.

At the panel session of the Conference on August 24, 2020 Chief Researcher for the IMEMO Prof. Marina Strezhneva made a report about the applicability of the Alexander Bogdanov’s tektology to the study of organizational metamorphoses, which the European Union experience today. Tektology is presented in the report as the original epistemological methodology for studying (and building) complicated systemic complexes of various degrees of organization, which are actively interacting with the environment. 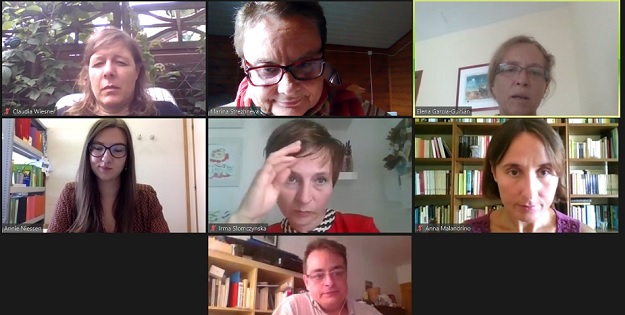 On August 25, 2020, Marina Strezhneva took part in the event as a moderator of the panel session on the topic “European Foreign Policy and Global Governance”. The participants of the meeting analyzed the role of the institutions of the EU in the foreign policy and their contribution to the global governance in such spheres as migration, protection of human rights and the supremacy of law.