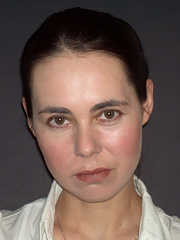 Dr Ekaterina Stepanova heads Peace and Conflict Studies Unit and is a lead researcher at National Research Institute of the World Economy & International Relations (IMEMO), Moscow. She is an editor-in-chief of the IMEMO journal on peace and conflict studies “Pathways to Peace and Security”. She is a Russian Academy of Sciences (RAS) Professor and member of the IMEMO Dissertation Council on Political Sciences and History.

Prof. Stepanova teaches in English at the School of Government and International Programs, MGIMO-University, Moscow, and at the European University in Saint-Petersburg.

She serves on editorial boards of Web of Science/Scopus journals “Global Governance” and “Global Responsibility to Protect”. She is a member of Global Peace Index (GPI) expert panel and a contact point at IMEMO for Global Research Network hosted by the UN Counterterrorism Committee`s Executive Directorate (CTED). She is also a member of Joint U.S.-Russia Expert Group on Afghanistan, and of Global Initiative against Transnational Organized Crime. In Russia, she serves on the executive board of non-governmental PIR-Center and is a Russian International Affairs Council (RIAC) expert.

Her previous professional experience includes working as a Lead Researcher and Head of Armed conflicts and conflict management programme at Stockholm International Peace Research Institute / SIPRI (2007-2009) where she had also worked as a visiting researcher in 2003. In 2017-2019, Prof. Stepanova lectured in English at School of Public Policy, Russian Academy of National Economy & Public Administration (RANEPA), and, in 2009-2017, at the European University in Saint-Petersburg (EUSP). In 2006-2009, she headed a Group on non-traditional security threats at IMEMO’s Center for International Security and, in 2001-2006, was a senior researcher at IMEMO’s Center for Political and Military Forecast. In 2003-2006, she taught at the World Politics Department at Moscow State University.

In 1995, Ekaterina Stepanova graduated in modern and contemporary history of Western Europe and America, with Honours and Gold medal, from Moscow State University’s History Department, where she later defended her PhD equivalent – Candidate of Sciences in History degree (1998; dissertation on “The U.S. evolving model for armed conflict management, 1989–1997”). In 2011, she defended her Doctor of Political Sciences (Dr.Habil. equiv.) at IMEMO (dissertation on “Terrorism in asymmetrical conflict at the local/regional and global levels”).