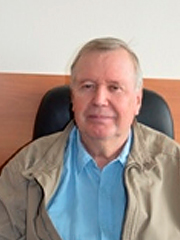 Corresponding Member , Dr. of Science (Economics)
Member of the Directorate

Areas of Expertise:
Extensive expertise in global economy and international economic relations. The range research interests include the study of the functioning world economic mechanism, the problem of integrating Russia into the global economy, regulation of foreign economic relations of Russia. Author of many scientific papers published in Russia (USSR) and abroad, participated in several major international projects.
Chairman of the Dissertation Council at IMEMO RAS. A member of the editorial board of “MEiMO”; a member of the editorial board of the journal “Spatial Economics,” Far East Branch of RAS, and the Bulletin of the State Registration Chamber with the Russian Ministry of Justice. Member of the Scientific Council of the Center for Integration Research of the Eurasian Development Bank (EDB), a member of the Scientific Expert (Academic) Council of the Institute for Energy and Finance, a member of the Academic Council of the Center for Situational Analysis of RAS.