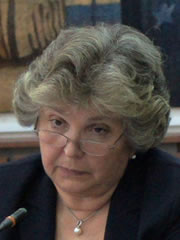 Academician, Dr. of Science (Economics)
Member of the Directorate

TEACHING BACKGROUND AND EXPERIENCE:
Natalia I. Ivanova was successful as a Ph.D. thesis mentor for seven Ph.D. candidates, and a Doctor of Sciences thesis mentor for one candidate
2010 – Lecturer, Open University of Innovation
2007-2008 – Teacher, Higher School of Economics, course on “National Innovation Systems”, Department of Economics
Co-author of the textbook “World Economy and International Business”, Moscow, KnoRus, 2005, 2006, 2007, 2008

PROFESSIONAL AWARDS:
2006 – “Honored Economist of Moscow,” honorary title and a sign
2001 and 2004 – Winner of the contest in the category “Best Economists of Russian Academy of Sciences,” by the Science Support Foundation
2017 – Medal of the Order of Merit for Country of II degree for her great contribution to the development of science, education and training of qualified specialists and many years of diligent work