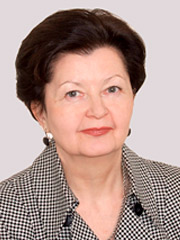 1974: successfully completed full-time post-graduate study in the Institute of World Economy and International Relations (IMEMO); Ph. D. thesis: “International money market in 1960–1970s and its influence on US economy” (1974).

From 1992 worked in Russian banking industry, including Vneshtorgbank (1996–2005) as advisor, head of Department, Deputy director of PR and Information Division.

From 2010: member of Expert Council for Arctic and Antarctic under Head of the Council of the Federation of Federal Assembly of Russia.

Author and co-author of more than 30 monographs (published in Russia and other countries) and many articles in science magazines.