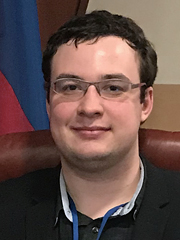 Course papers: 1) Russia and Russians as seen by foreigners (based on 16 – 17th century reports) 2) The West as seen by Eurasianists and Neo-Eurasianists 3) The notion of ‘conservative revolution’ in German and Russian Emigrants’ political thought of the interwar period 4) Religious tolerance in modern Great Britain: a case study of reciprocity between Islamic and Christian cultures.

Final qualifying paper: “The reappraisal of the Russian and German revolutionary experience (1917 – 1918) in the writings of Russian emigrant and German conservative thinkers”.

Phd dissertation – The philosophy of politics of A.S. Panarin: the development of the author’s conception and its role in a modern political philosophical discourse – was successfully discussed on the 5th march, 2019 at the Institute of philosophy of the Russian Academy of science.

Since the 2nd may, 2017 – a junior research fellow at Primakov National Research Institute of World Economy and International Relations, the Centre of social economic and political studies.

1) Sigachev M.I. Political culture of western liberalism in the works of A.S. Panarin (in Rus) // Historical, philosophical, political and legal sciences, culturology and art history. The questions of theory and practice. 2014. ą 10 (48). pp. 173 – 178

2) Sigachev M.I. The scientific legacy of A.S. Panarin as a methodological foundation of Area Studies (in Rus) // The Vestnik of Moscow University. Series 19: Linguistics and intercultural communication. 2015. ą 1. pp. 157 – 166.

4) Sigachev M.I. Global Alternative to the Liberal “End of History” in the Works of Political Philosopher A.S. Panarin (in Eng) // Contemporary studies of young scientists in the sphere of humanitarian sciences: the materials of a scientific conference. Saratov: 2014. pp. 161 – 163.

3) XV international Panarin Readings “The choice of national strategy in the context of global instability and the civilizational heritage of Russia” (Moscow State University, the Heritage Institute, 2017)

4) XVI international Panarin Readings “The world of civilizations and “modern barbarianism”: the role of Russia in overcoming the global nihilism” (Moscow State University, the Heritage Institute, 2018)