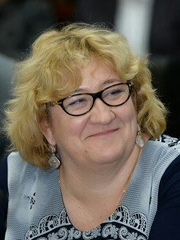 Has graduated from the Tashkent state university, faculties of the romano-German philology (1987), historical (1994)

PhD in of political sciences. A thesis "The international relations in Central Asia in 1917-1924"

Since September, 1993 till November, 1994 – The Lecturer of German at the Tashkent chemical- technology institute, at department of foreign languages;

Since November, 1994 till September, 1998 – The attache, the third, first secretary in the MFA of the Republic of Uzbekistan;

Since May, 2003 – till June, 2005. The senior researcher  at Institute of the international economic and political researches of RAS;

Since June, 2005 after merging IMEPI of RAS with Institute of economy of RAS till December, 2016 the – leading researcher, managing sector of economic development of the Post-Soviet countries of the Center of Post-Soviet researches in IE RAS.

Since November, 2012 till 2017 – the scientific secretary of dissertation council "World economy" at Institute of economy of RAS.

Member of the committee on economic integration of the countries of SCO and CIS of Chamber of Commerce and Industry of the Russian Federation. Member of the Euroasian association of the international researches.

The expert of the Russian council for the international affairs, Fund of public diplomacy of A. M. Gorchakov the Russian Foreign Ministry.

Participation in international (the EU, ESCAP) and Russian (RGNF, the Russian Federal Property Fund, MEDT, Minpromtorg) grants on scope of economic development and cooperation of the Post-Soviet countries.

The profile in Science Index