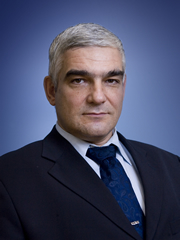 Editor-in-Chief of the journal “The World Economy and International Relations” of Russian Academy of Science.

Since 1992 has worked as political analyst and researcher of Post-Communist transformation of Russia. Known also as a commentator for media on Russian politics. As a consultant he participated in different electoral and political campaigns.

Since 1999 till 2013 worked as a Scholar-in-Residence at Carnegie Moscow (Russian domestic policy and Comparative studies of Post-Communist transformation in the CIS countries, since 2009 East-East program, simultaneously since 2010 chairman of Russian part of Black Sea Peacebuilding Network” project); expert at Gorbachov-Foundation (Russian domestic policy and Post-Soviet politics) since 1993.